There are 2 types of bans, a server ban and a platform ban.

Any user on a server that has a role with permissions to ban can ban a user from that individual server.

A user with permissions to ban another user can ban a user either by going to their account menu and pressing Ban or click or by typing in a command to make a bot ban a user from the server. Users can also ban users that aren't in the server by typing in a ban command with their user ID and a bot would ban them. The ban will be permanent until a moderator unbans the user, bots can however be used to temporarily ban a user.

There are 2 different types of bans:

If a user violates the Discord Terms of Service or the community guidelines, Discord's Trust and Safety Team can ban users.

A ban from a server 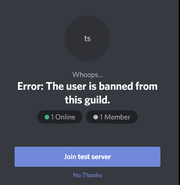 A ban from a Discord server

A warning from Discord Trust and Safety

Community content is available under CC-BY-SA unless otherwise noted.
Advertisement